Warning: Madman on the run

Residents of Tameside and the surrounding areas are once again being warned to be on the lookout for a demented runner. He is thought to be following a 33 mile circuit of the borough along a series of paths known locally as the Tameside Trail. Apparently the looney’s tormented soul is driving him to attempt a full circuit of said trail on the mystical fourth Wednesday of October. By a strange, and perhaps scary, coincidence that day is also the fortieth anniversary of the day an exercise obsessed individual was unleashed upon the world.

Enough of the imaginative writing/hard work - just give me your money! Once again I am raising money for Melanoma Research at the Christie Hospital in memory of Janene. Generous sponsorship last year raised over £800, for which the Christie were very grateful.

Sadly the Tour of Tameside series of runs I did last year were not held in 2004 so I have had to make up my own challenge to spur myself on to even more suffering - hence the Tameside Trail.

The trail starts and ends in Broadbottom (at Lymefield Visitor Centre) and follows footpaths, canal towpaths and some sections of road around Tameside with the odd foray into Stockport and Oldham. Much of it is undulating but there are four significant hills on the route (see the Trail Profile). These are Werneth Low, Hartshead Pike, Noonsun Hill and Harridge Pike which, at 380m / 1247', is the high point. There is a total of ~1250m / 4100' of ascent on the trail. As some of you have probably worked out it is quite a challenge to do in a day.

I have a support team meeting me at strategic locations with supplies of water, food, changes of kit and a wee bit of motivation. Should any of you wish to come along to cheer, jeer or just give us your money I have put an approximate timetable for when I hope to be passing easy access points on the following page Stage information

Anybody who considers themself mad enough is more than welcome to join me running a section or two of the route but be warned I will be running slowly, I will be walking up the hills and I will try to jump on you for a piggy-back wherever possible!

Like last year I will personally add 10% to the total donated by sponsors.

Stage information can be downloaded from here.

The official guide to the Tameside Trail is available from Tameside Council's Visitor Centres. It can also be purchased from Amazon via this link Tameside Trail Guide 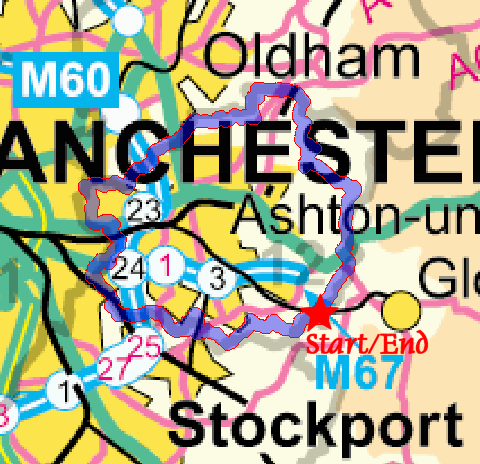