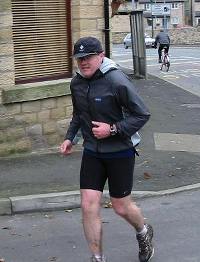 The Met Office said overcast and windy with rain later so I thought I had better get on with it before the rain came. Setting off from Lymefield at 8:35 it seemed like I had a really long way to go! The climb up from the Etherow Valley onto Werneth Low brought me out into the wind where I collected the first of my eight supply stashes and slipped on a windproof top before heading out across the Low.

The descent from the Low was nice and muddy with the path emerging from a cattle churned bog onto the main road. A short section of road took me to a field and then the Peak Forest Canal. Dropping down from the canal to the Tame Valley I entered boggy territory once more. I had only done six miles but my legs were already aching and I was feeling sick from having resupplied too much from my first two stashes.

Lots more boggy ground brought me to the first support point where the support team was waiting. I was a little behind time and decided to swap to my smaller bum bag as I felt I was carrying too much weight. A quick change and I was off through the urban leg of the trail. Escaping onto the footpaths I found that the damp patches from my training / recce runs had now matured into bogs. At least the weather meant that most of the half-term teenagers were huddled indoors with PlayStations or each other so I didn't get much jeering.

By the time I got to Daisy Nook park for a leisurely picnic lunch I was on time again. A couple of sandwiches were wolfed down with energy drink and then it was off for the run through the park with Robert and the dogs. 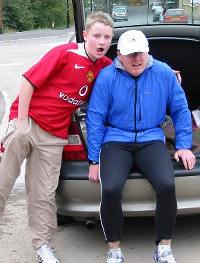 As I crossed the top of Hartshead Pike I got well buffeted by the wind which seemed to get stronger as I traversed Holly Bank / Brown Edge. The discomfort began to sink in as I descended steeply to the road and then ascended Quick Edge. I felt like giving up as I approached the next support point at 23 miles because I really did not think I had enough in me to get another 10 miles.

The support crew cheered me up by taking pictures of my shuffling approach. After a refuel and change of clothes I felt better and set off up Noonsun Hill into the wind once more. Three miles later I arrived at Carrbrook and I knew I could go all the way barring catastrophe.

A few more photos and I was off on the 4.5 mile leg over the moors. The wind was really quite impressive as I passed the highest point of the trail and began the long descent to Hollingworth. On that descent I found one of the most impressive cattle churned bogs I have ever had the pleasure to stagger through. It seemed to be never ending but eventually merged into a slurry filled farmyard! Once I got to the support crew I poured 2 litres of water over my shoes to rinse the muck off them.

I now only had 2.5 miles left but knew there was some uphill trudge before the deal was done. The muscles below my knees felt like they were on fire and my feet had gone numb by but it wasn't far and I could walk the hills without any real discomfort. At the top of the hill there was a farmyard to cross before getting to the road. Like the earlier one it too had a pleasant mix of mud, water and animal waste to splodge through. 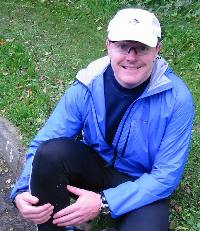 Once through the mire I was soon onto a road with only a mile to go. The biggest obstacle now was crossing the main road in Broadbottom. That last mile was certainly not the quickest but it felt pretty good and I was soon enjoying the luxury of the grass verge at Lymefield Visitor Centre 8 hours and 8 minutes after leaving.

At the time I thought never again but now a couple of days have passed I think I might be tempted to try for a faster time once the weather is better and the bogs have dried out a wee bit. Looks like the sanity was only temporary...